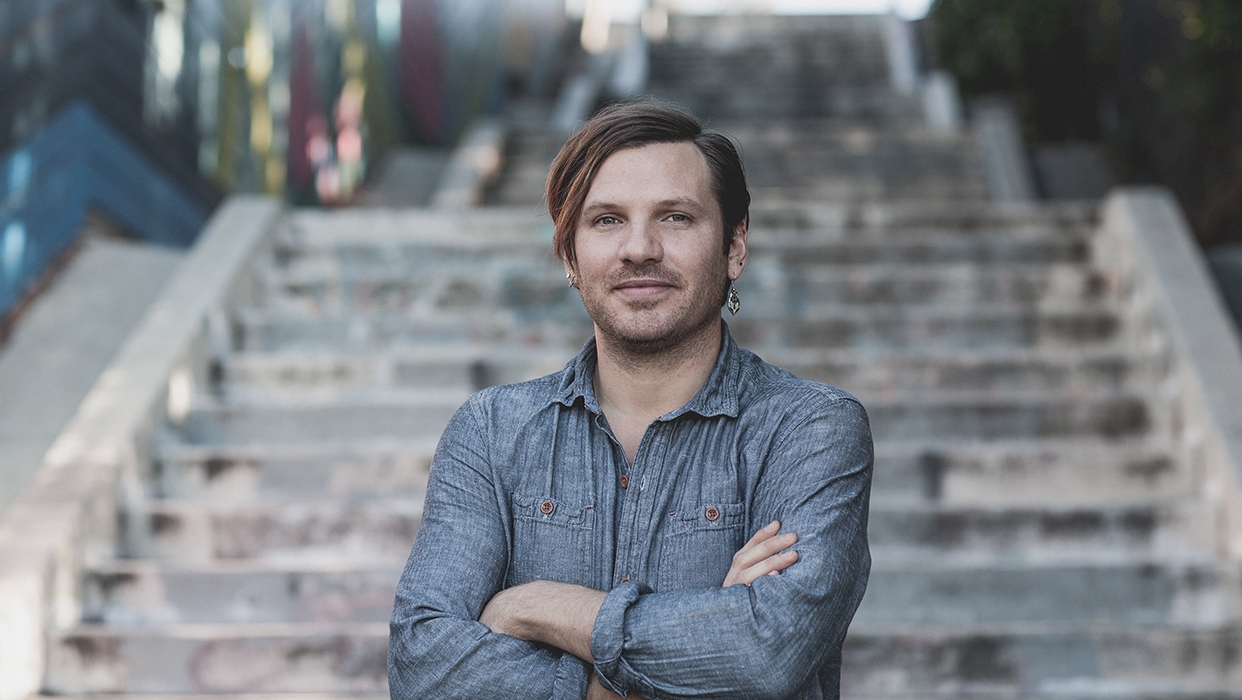 IF I MAKE SOMETHING AND SET ASIDE THE TIME TO BE DISCIPLINED, DO SOMETHING ALMOST EVERY DAY, IT SETS THE COURSE FOR THE REST OF MY DAY.

Christian Wargo has had one broad impulse throughout his life—embedded in his DNA, perhaps—and that’s to make stuff. Sometimes he makes songs and gets nominated for a Grammy. Sometimes he makes wooden stools and sells them to people with good taste. Sometimes he draws circles and triangles on paper and gives them to his friends. All of these things, he does very well, as part of a sincere day-to-day practice unconnected to any conscious desire for fame and success, two things that have floated in and out of his life.

“Doing something, creating something regularly is just part of how I free up space in my head and in whatever soul I might have,” he says. “If I make something and set aside the time to be disciplined, do something almost every day, it sets the course for the rest of my day. Whether I’m drawing or making a song or making a stool, it satisfies a different thing, scratching a different itch.”

Born in New Jersey to an art teacher mom and woodworking hobbyist dad, there was never any question he was going to make stuff. So he skipped the part of an artist’s life that’s spent figuring out if you are an artist and got straight to it—he was drawing pretty seriously from the age of 4.

“Anything that anyone asked my mom to do, she would just exceed expectations,” says Christian. “She’s a big inspiration to me, both my parents are.” They encouraged Christian’s early passion for drawing comic books and cartoons, and sent him to a vocational high school where he took art, drafting and woodworking his first semester. To Christian’s surprise, he didn’t like the art class. He hated being told what to draw. 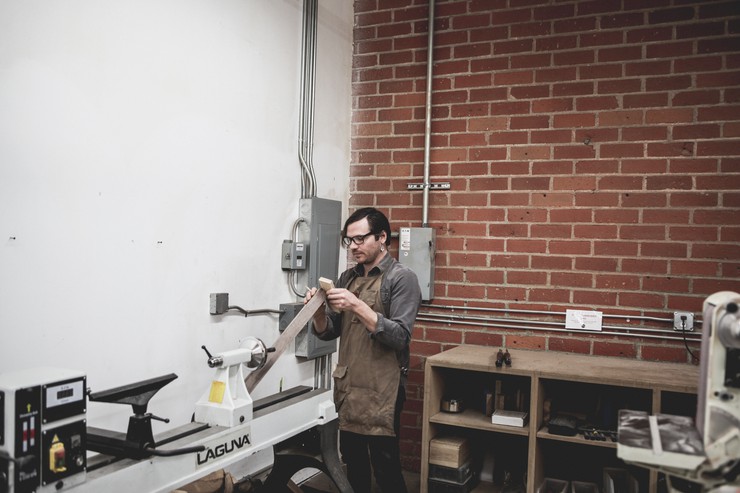 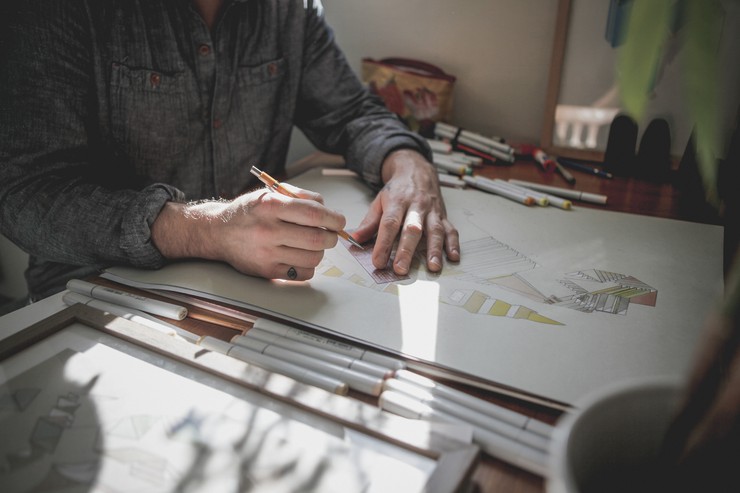 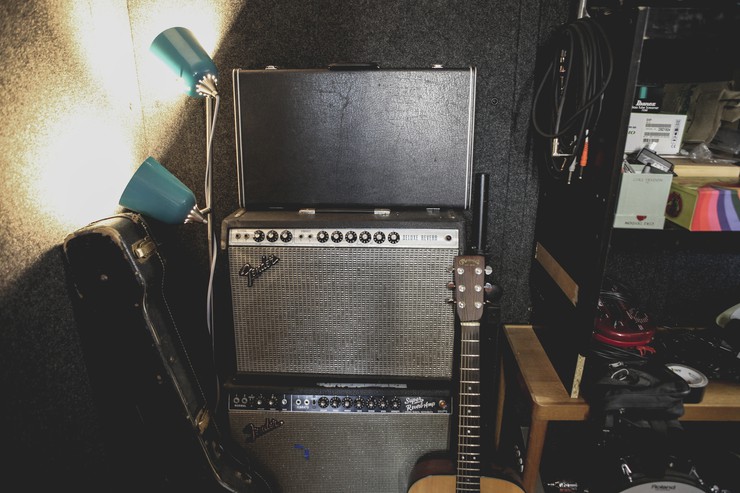 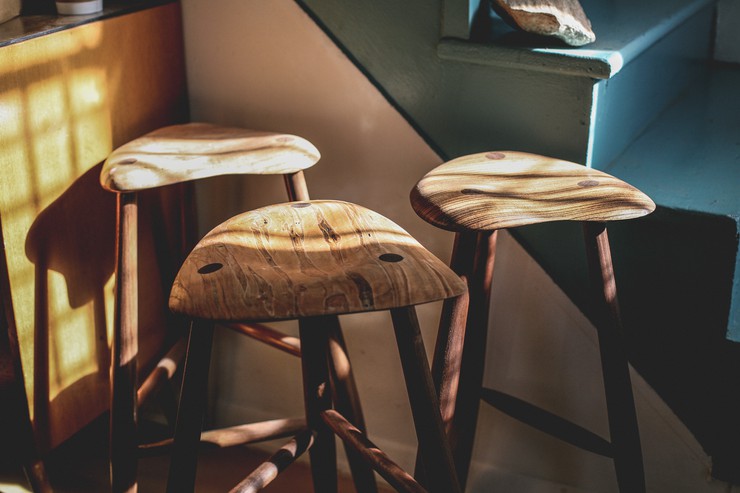 “I felt like I’d been doing it long enough that I already had my own little world, you know?” He liked the woodworking, though and chose it as his main course of study for the next 4 years. When his class went on a field trip to wood craftsman Wharton Esherick’s museum, Christian was inspired by how the principles of fine art sculpture could be applied to something as simple as a wooden stool. “Maybe I’ll do something like that, too, one day,” he thought.

Christian was also exploring music, his love of pop and rock was sparked when he found an ABBA cassette in a graveyard, at age 11. “It wasn’t next to anyone’s headstone, so I don’t think it was like someone bringing their deceased loved one an ABBA tape. But I saw this ABBA tape in the grass and I was like, oh.”

He took it home and played it on his Teddy Ruxpin tape player. The song “Angel Eyes” did something to him. “I liked the harmonies. I liked everything.” He told his mom about it and she came home the next day with three essential Beatles albums, The Animals Greatest Hits and the Jesus Christ Superstar soundtrack. Then he saw the movie Back to the Future and decided he wanted to make music, as well as listen to it.

“When Michael J. Fox strummed that guitar in front of that giant speaker? I know it’s ridiculous, but that was like, ‘I wanna play guitar.’” This time, his parents weren’t sure if he needed yet another distraction from his studies. They said they’d buy him a guitar only if he brought his grades up. He didn’t, and he didn’t get a guitar. So he tried to build his own bass guitar and used whatever he could get his hands on to make music, including a Hawaiian harp, acoustic guitar, Casio keyboard and some drums.

“If you want your kids to do something, tell them that they can’t,” says Christian.

Recording on a dual cassette deck and eventually a four track in his bedroom, he immersed himself in the giant, looming abstraction that is music. “It’s like this other experience. I don’t know if it’s really an attainable goal to make the perfect song, or even something you should try to do. But it is one of the trickier forms of expression that I’ve decided to get into. Like, what do you say with a song?  What is the mood gonna be? What am I trying to convey? Do I wanna say something? Every time I try to say something, I feel like it comes off contrived, and then I feel like I’m preaching. I don’t want to do that.”

He started a band called Crystal Skulls, writing purposely obtuse, angular music, moving to Chicago and then Seattle, where he’d heard there were a lot of young, inspired musicians. When some members of Crystal Skulls left to join Sufjan Stevens’ band, Christian joined an emerging Seattle band called Fleet Foxes who’d been rehearsing in the same space as he had. Fleet Foxes’ eponymous record, a shimmering, baroque collection of intricately arranged neofolk, became a defining moment in alternative music.

Christian toured the world. Got nominated for a Grammy. Then, the members of Fleet Foxes went off in their own directions, taking a sabbatical that seemed, for some time, very open ended. Christian moved to Echo Park, Los Angeles, wondering what to make next. He played in a classic rock cover band called The Good Time Boys, shredding AC/DC and Bob Seger covers for an audience of largely drunk young people in Hollywood, aiming to master the building blocks of good old-fashioned rock ‘n’ roll, quite opposite to the soaring, ethereal music of Fleet Foxes. About a year ago, photographer Autumn De Wilde (whose ex-husband plays drums in The Good Time Boys) asked Christian to build her a bookshelf.

It had been a least a decade since he’d done any woodwork. And it was very hot in Autumn’s backyard. “I was getting really frustrated. But, eventually I did finish it and I was like, ‘You know,’ sitting back, ‘it’s cool.’” When he visited his folks in New Jersey, he and his dad hung out in the woodshed and made lamps. Back in LA, he signed up for a membership at Community Woodshop LA, and started making stools much like the Wharton Eshericks that had so inspired him as a kid.

"A table in my bedroom that I found in the trash. It holds a couple of paintings by my friend Joe Rudko, a piece of black locust wood from a tree cut down in the yard of my dad's childhood home, a Patrón bottle I filled with things I found in Joshua Tree and a lamp from Target."

"A shelf in my hallway that has some rocks from various places around the world, a slingshot from Trees Of Mystery in the Redwood Forest, a geometric magnetic toy and a print by Jesse LeDoux."

"Me working on a stool leg on the lathe at the Community Woodshop, LA."

"My boots and a bunch of walnut wood chips that fell to the floor while I was turning the above mentioned stool leg at Community Woodshop, LA."

"A drawing I was working on when everyone stopped by to take my picture. It doesn't have a name."

Wearing a mask and surrounded by sawdust, Christian contemplated the parallels between woodwork and rock ‘n’ roll. “Making a stool is like sitting in the woods by yourself strumming an acoustic guitar for no other reason than the feeling of doing that,” says Christian. “A stool is me in my, you know, space. And I don’t have to answer any questions. I just have to, like, make. Being in a band can be so serious and so heady and so like, ‘Oh, is this vibe too much?’ or ‘Is it not enough?’—because it’s a group thing. There is this collaborative friction, that tension in a band being that makes the end product have some sort of life. If it was all safe and nice and stool-like, then it would be boring.”

While this article was being fact-checked, Christian brought up that Fleet Foxes, after 5 years on hiatus, may be getting back together. He and singer Robin Pecknold had talked about it at a Joanna Newsom show in LA just a few days prior.

“It’s not, like, ‘announced’ or anything, and none of us really knew it was coming, but it’s happening,” said Christian. “Possibly unofficially at this stage, but it’s definitely a thing.” Fleet Foxes fans will no doubt be excited by the news, and who knows, maybe Christian will design stools for the stage show — it’s obvious he relishes having more than one creative outlet.

“If stools aren’t popping off one day, I’ll jump over to a drawing,” he says. “If that’s feeling frustrating, then there’s music or, I’ll get out of town, see something beautiful outdoors.”

As much as he needs to spend time exploring the ideas in his head, it’s interacting with other people that keeps Christian grounded and connected. “Chat with a friend that is doing something that you admire. Reach out to people that are doing what you wanna do and just ask questions.” He really cherishes his friends, his community. “We can go long periods of time without really talking, but then when we meet up again, it’s like so nourishing to my soul, knowing that they’re still doing it, and everyone’s encountering the same roadblocks and we’re getting over them in different ways. Then you know, even when you’re making a stool, you’re not alone.”