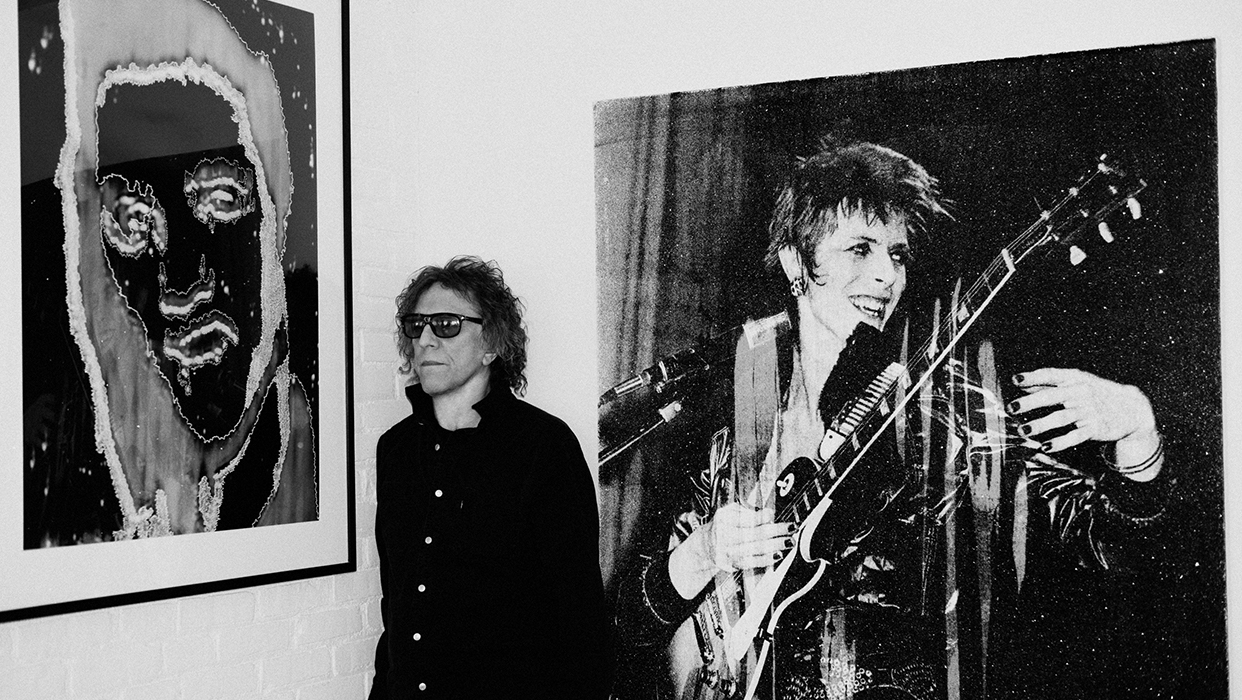 I think [Bob] Dylan said [it] well, ‘There's no success like failure.’ I have known failure, too. And failure is no success at all.

Mick Rock may not be a musician, but he’s certainly an icon of rock and roll. At the center of the music scene for many decades, from the emergence of glam rock and his photos of David Bowie, Iggy Pop and Lou Reed to the pioneers of new wave and punk with Blondie, and the Ramones, Mick Rock has created some of the most powerful and recognizable rock music imagery and album covers in history.

Mick didn’t start out pursuing photography. Growing up in Great Britain, Mick studied modern languages and literature at Cambridge University. In fact, the French Symbolists, English Romantics and American Beat poets influenced how he viewed many of his early subjects. Mick’s interest in photography began when he decided to “take an acid trip and pick up a friend’s camera.” Although he says he doesn’t recommend drugs to anyone, the act of picking up the camera for the first time without any inhibition ignited something in him. There wasn’t even film in the camera. He was simply enchanted with the “act of taking the photo.”

Soon after, he started running around with a musical crowd. “For whatever reason, at an early age, I got involved with musicians and people started giving me a few pennies to take pictures and it just kept rolling,” he says. “I never had agents or managers or stylists or any of that. There were no budgets. You got a little bit of money for what you did.” His love of photography and his fascination with the musician’s identity fueled his inspiration, ultimately developing into a career. “The whole point of it was that we were outsiders, we were rebels, we were living on the edge.”

His session with Syd Barrett, front man of the band Pink Floyd, was the first shoot that fully reflected his developing visual sensibility. “That was very important,” he recalls. “...because David introduced me to Iggy and Lou...He was excited about the fact that Syd Barrett was a friend of mine, and Syd was known because Floyd was getting well-known.” His career moved forward as one friendship and collaboration led to the next. As he developed his own voice and style of photography, he saw those iconic rock and roll figures as more than musicians. After seeing Mick’s photos of him in 1972, David Bowie said, “Mick sees me the way I see myself.” 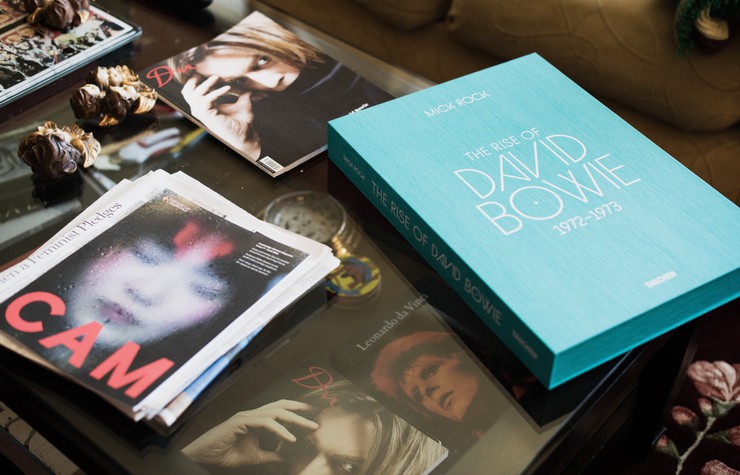 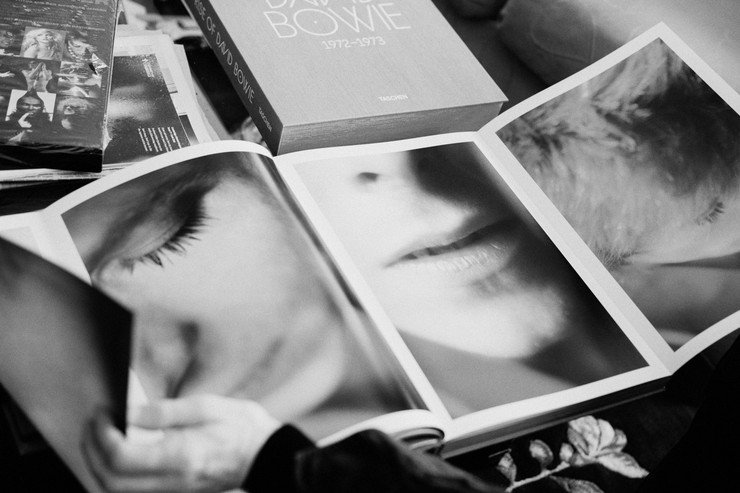 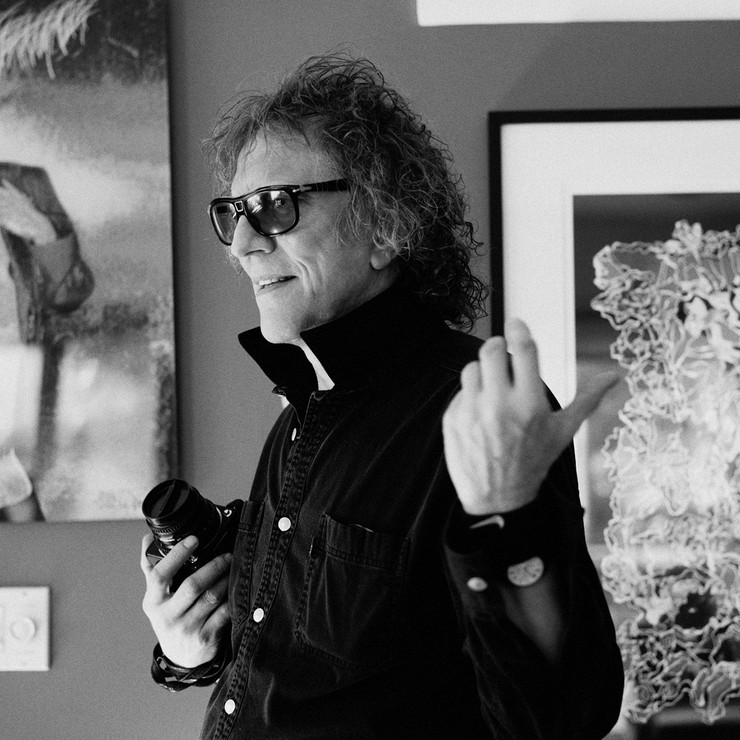 Although he is best known for his legendary rock n’ roll photos, Mick also produced and directed Bowie’s music videos "John, I’m Only Dancing", "Jean Genie", "Space Oddity" and "Life On Mars.” He is still as sought after as ever, working with many future legends like Daft Punk, Lady Gaga, Snoop Dogg, Pharrell and Janelle Monae.

Mick’s work has been featured all over the world, from solo exhibitions in Los Angeles to Art Basel and Paris Photo. At least 15 books on Mick’s photography have been published. In late 2015, Mick launched a fantastic photo book with David Bowie, published by Taschen. The limited edition version, signed by both Mick Rock and David Bowie has sold out; however, the trade version without signatures is about to be published. Mick Rock. The Rise of David Bowie, 1972–1973, includes many never-before-seen photos from the 21-month “Ziggy Stardust” period that launched Bowie’s career, during which young Mick worked consistently as his photographer. Only a few months after the book launch, David Bowie passed away. Mick said of his friend of over forty years, “Beyond sad. Difficult to absorb. Deeply moved. He was a sweet, sweet soul. He went out with such a creative bang. Such a privilege to have known and worked with him. Such a remarkable man and artist. I loved him.”

In recent years, Mick has also been spending time in front of the camera. In 2015, Ovation TV launched the series “On The Road With Mick Rock.” In each episode, Mick goes with the featured guest to their hometown, such as New York City with Grammy-winning producer Mark Ronson or Oklahoma City with psychedelic rock king Wayne Coyne of The Flaming Lips. In 2016 "SHOT! The Psycho-Spiritual Mantra of Rock," a documentary on Mick several years in the making by Barnaby Clay and produced by VICE debuts at the Tribeca Film Festival.

Despite his enormous success in photography, worldwide renown and continuation of a variety of creative projects, Mick’s idea of success is a grounded one. “I think [Bob] Dylan said [it] well, ‘There's no success like failure.’ I have known failure, too. And failure is no success at all,” he says. “I never really understood success and failure until I flamed out.” Following quadruple bypass surgery in his 40’s, Mick became focused on living a healthy and long life.

In order to maintain balance in his creativity, career, and health, Mick developed a regimen. He has been a vegetarian for over 20 years and started doing yoga in his twenties, which he practices before every shoot. Mick creates a focus in his mind and body, then steps into the session and allows the work to flow through him. “I do my process, and I do it every day, everywhere I am. There [are] no exceptions,” he says. He used to recite mantras, now, he practices power breathing and uses mind machines that synchronize certain sounds with meditation.

It is with great intention, discipline and passion that Mick continues to move forward. His career is a study in creative longevity and a brilliant example of what can happen when you follow your passions to pursue your true calling.