If I had one sentence to describe my art, I'd say, 'It's a celebration of the beauty and the bittersweetness of life.'

Painter, illustrator, filmmaker and Emmy Award-winner Gary Baseman is well-established in his artistic career. His work is featured in the permanent collections of the National Portrait Gallery in Washington D.C. and the National Gallery of Modern Art in Rome. And he is among the best known figures in contemporary pop surrealism, a visual art movement that took elements of popular culture and elevated them, dismantling and redefining the rules concerning fine art. Which is somewhat ironic, considering that, growing up, Baseman was always a consummate rule follower. “I was such a responsible kid, who got really good grades, never ditched a day of school, and didn’t drink till I was 21,” says Gary. “Everything you’re supposed to do– until I realized no one gives a f**k.” It was that realization—the realization that you can can shape your own destiny, if you wish—that resulted in the successes he enjoys today.

From a very young age, Gary knew that he wanted to be an artist, but explored other careers before finally embracing his true calling. He never studied art formally, choosing to major in communication studies at UCLA. After graduating top of his class, he secured an entry-level job at an ad agency, and took night classes in art direction and advertising concept. “I learned how to be a message maker,” says Gary. “I studied persuasive communication, visual communication, and learned how to create intriguing images that would grab a viewer.” He quit the ad agency after a year, mainly because was constantly in trouble for drawing on the job. “I pissed so many people off that I got banned from the creative department,” he says.  “They even made me sign a piece of paper that said if they caught me drawing on the job, they would fire me.” 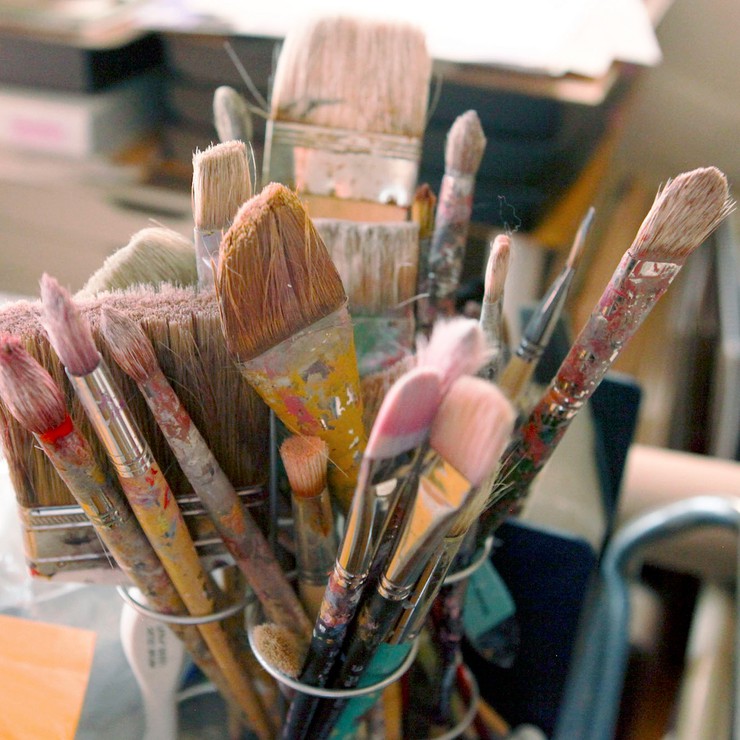 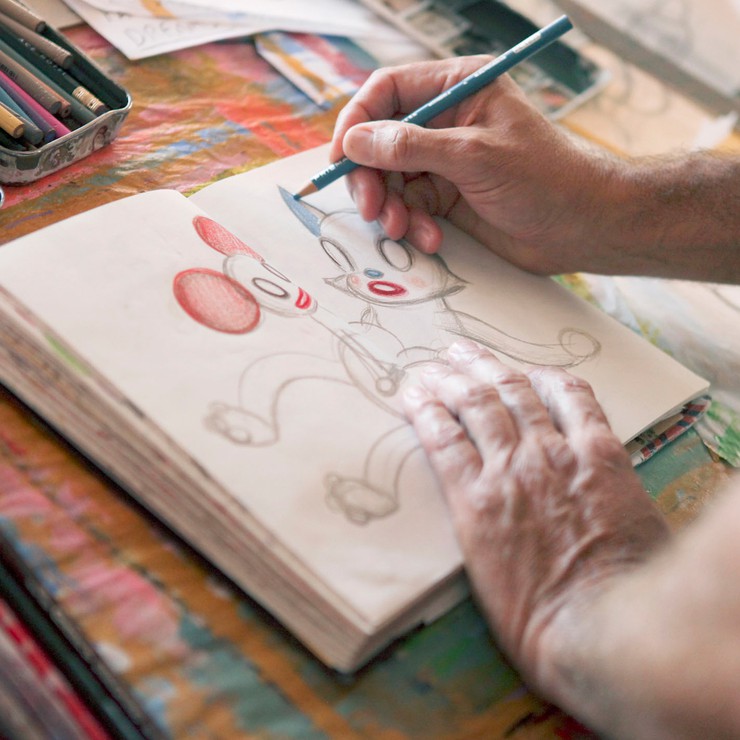 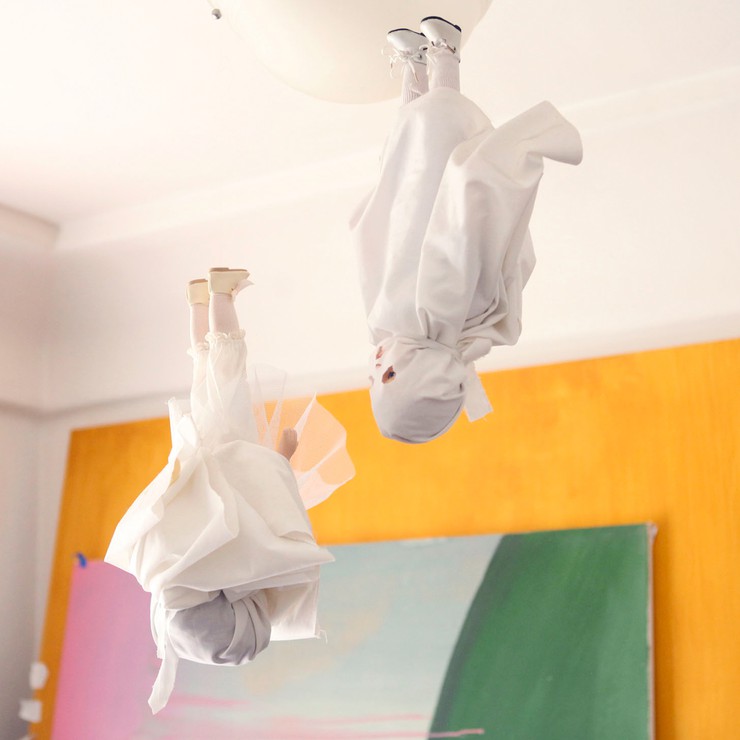 He held menial jobs by day while working on his portfolio at night, he presented it to one of the best-known magazine art directors in New York, who gave him his big break, putting his work on the cover of the New York Times Book Review. Gary moved to New York and became Time magazine’s go-to illustrator, while also working for GQ, Men’s Health, US News & World Report, The Atlantic Monthly, and illustrating the best-selling board game Cranium. In 1998, he created the Disney animated series Teacher’s Pet, which earned him an Emmy. “But the only people who knew me were art directors and editors,” says Baseman. “And I wanted the world to know me. I had something to say, and I wanted to say it. I wanted to create art.”

He found himself wondering about ways to inhabit both the commercial and fine art worlds, something he would later term “pervasive art”. And, in 1999, he made the transition into fine art with his first gallery show, Dumb Luck, in Pasadena. Not long after, he showed alongside his friend, fellow pop surrealist Mark Ryden, establishing himself as a part of the pop surrealism movement. Fifteen years later, he continues to show at galleries and museums all over the world, including the LACMA in Los Angeles, the MOCA in Taipei, and a major collaboration with the fashion brand COACH. In 2015, his Toby character—Baseman’s tragi-comic alter ego—celebrated his tenth birthday with a massive sculptural installation in Hong Kong’s Times Square. He also completed a documentary film, tracing his parents’ remarkable story as Ukrainian Jews who narrowly escaped the Nazis during the Holocaust and the subsequent whitewashing of the atrocities that occurred in their town. That project has been as meaningful to him, perhaps more meaningful, than any artwork he has ever created. “Making the film, I found myself asking, 'Is this what it’s all been about?  Is this the reason why I’m even alive?'" 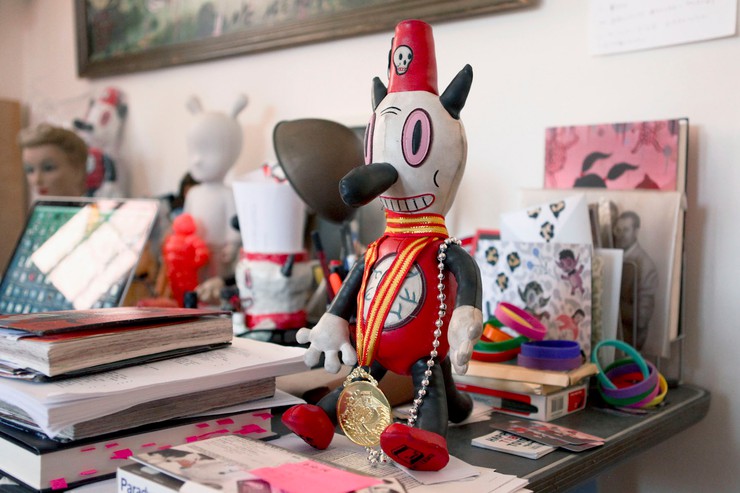 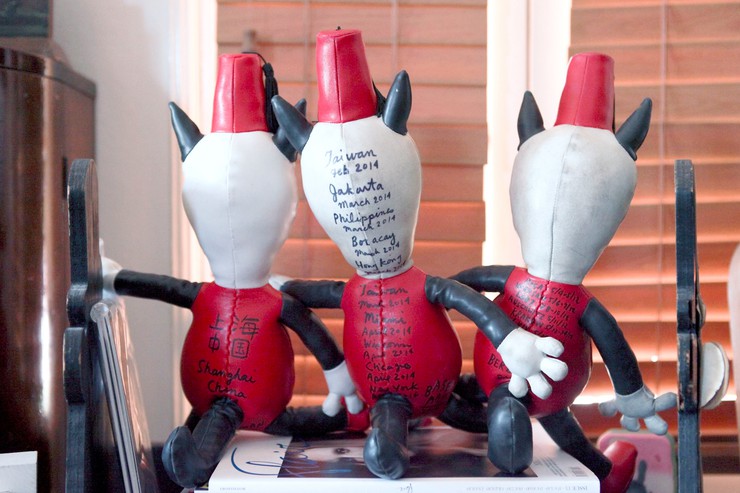 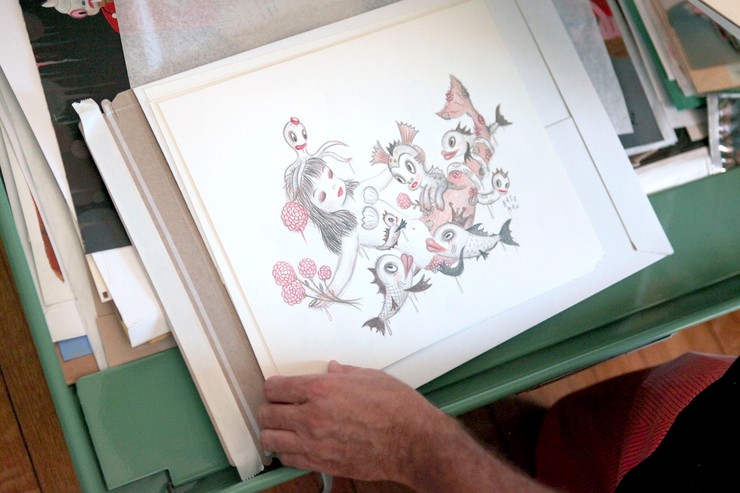 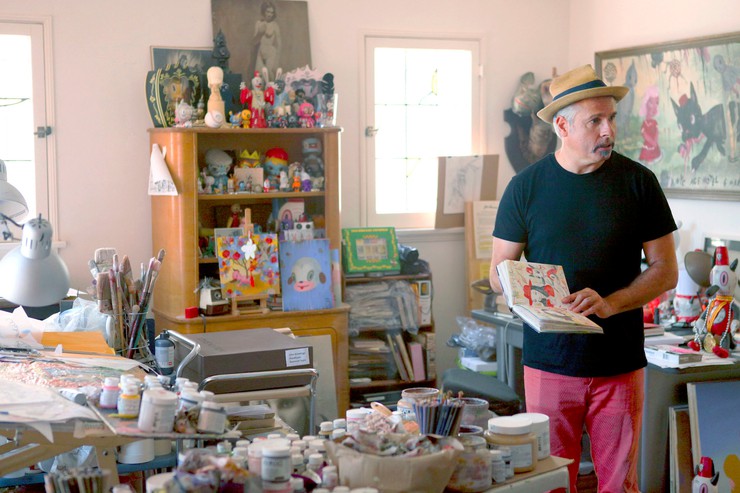 Despite his successes, his vast circle of friends and his travels around the world, Gary is never quite sure if he is happy, something he accepts as part and parcel of being an artist for the long haul. “If I had to use one sentence to describe my art, it’s that it’s a celebration of the beauty and the bittersweetness of life,” he says. “But I don’t know if you have to be miserable to create good art—I think good art just comes from somebody who’s willing to work hard, concentrate and make decisions, edit and be unique and interesting.  Maybe to do that, you have to have a certain kind of obsession, which runs counter to being happy. Like, if you’re happy, you’re too busy doing the happy stuff to make art.  You know, you’re going out and picking flowers. I guess?”

“I blindfolded this bunny during a fashion photo shoot in my studio for Elle China during my Spring Collection for Coach. They brought model, Dylan Xue, to wear my collaboration with Stuart Vevers. One main creature for the collection is Emmanuel Hare Ray, who is a blindfolded Rabbit. I blindfolded the stuffed bunny and, then, Dylan.”

“I was commissioned by AT&T to create a line art painting. During PRIDE, everyone would pick a color of the rainbow, dip their thumb in paint, leave their mark and together we would create a group painting. We did this in LA, Seattle and San Diego.”

“After every long journey with Toby, he gets retired. I will write down where he has traveled, sign him, and date it. This special Toby survived my opening at Colette in Paris, my art performance at the Serpentine in London, my museum exhibit in Shanghai, Tokyo, Taipei and the Great Wall of China.”

“For my Skirball exhibition, The Door is Always Open, I created an 8000 square foot home in the middle of the museum. For the opening, I cast a key from my parent's home and put the head of Toby on it. For anyone who greeted me, I surprised them with this key to let them know that my home was now their home and that this key should represent the key to creativity.”

“I love being surrounded by inspiration in my studio. I've collected about a dozen Pete the Pup wood-jointed toys from the 1930s. I fell in love with Pete because I saw him as a failed cartoon character who was never as big as Mickey or Felix. I can relate to an underdog. So anytime I would find an orphan Pete, I would adopt him.”