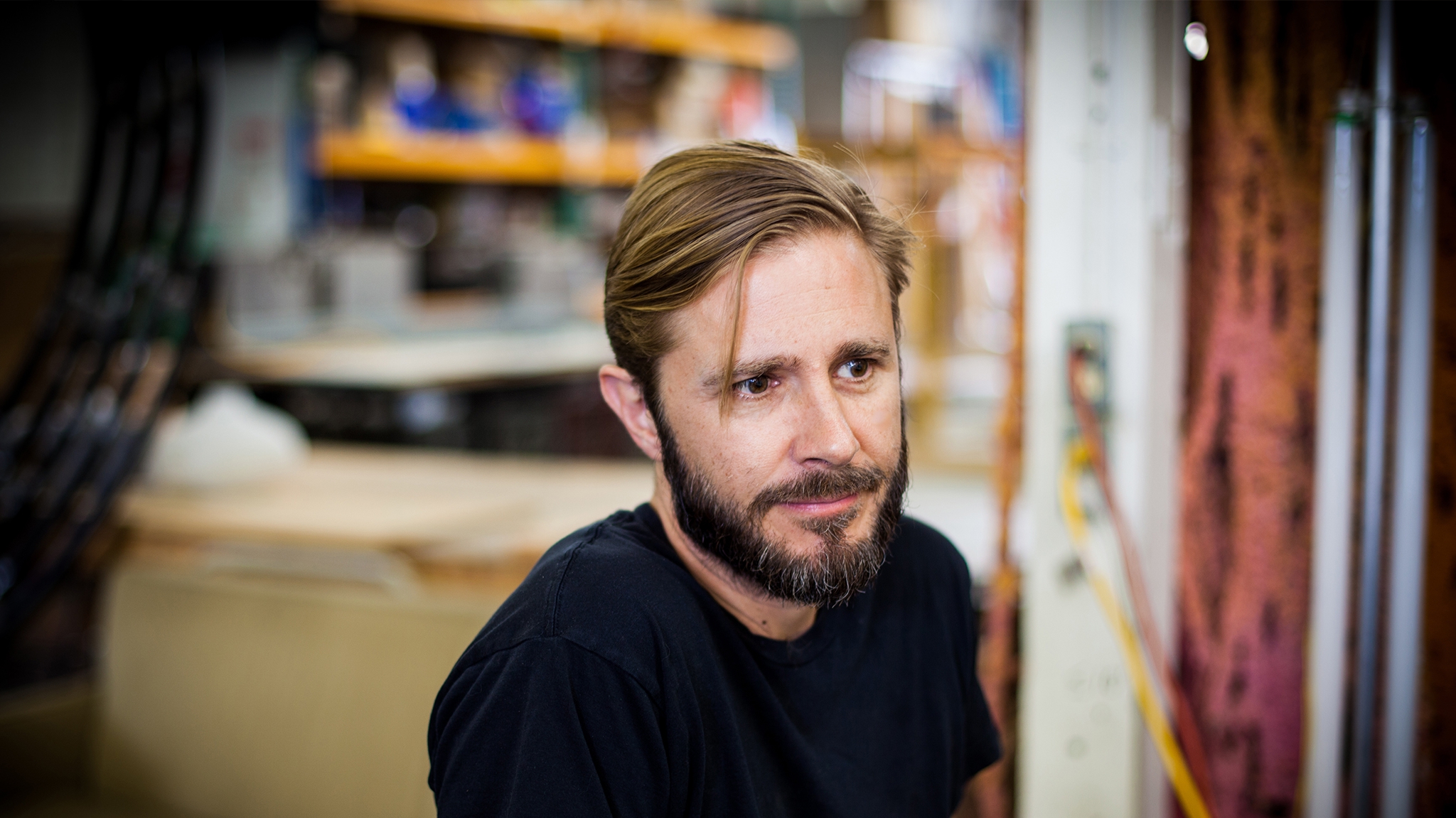 THE PROBLEM IS...WHEN YOU START WALKING THOSE PATHS [TO GUARANTEED SUCCESS], THEY BECOME SO WELL WORN THAT THEY NO LONGER LEAD TO NEW TERRITORY WHICH IS KIND OF WHAT IS INTERESTING IN THE ARTS. FINDING A PATH INTO NEW TERRITORY.

“Maybe there was an inkling, some vague notion back in my childhood, that I would end up doing something like this,” says avant-garde installation designer Ben Ball, showing me a photograph on his phone of a spaceship/house he designed at age 9. But, Ben, who creates mind-bogglingly complex, large-scale, site-specific sculptural structures you might have seen in airports, museums and at Coachella, definitely didn’t start his career thinking, “I am going to make mind-bogglingly complex, large-scale, site-specific sculptural structures.”
Like so many Distinct-featured creatives, his path towards professional and creative fulfillment, and his company—Ball-Nogues Studio, founded with Gaston Nogues in 2004—came as the result of countless ideas, false starts and incomplete notions. He hesitates to even call it a “path.”
“I do notice this thing in younger people—and it’s something I had, too—this need to know there is a path laid in front you that you can follow that will guarantee success,” says Ben. “The problem is, oftentimes, when you start walking those paths, they become so well worn that they no longer lead to new territory—which is kind of what is interesting in the arts. Finding a path into new territory.”
Ben was raised in Iowa to parents who were “really very different people.”
“My mother was a theater person, and my father was an attorney. They were divorced at a young age so I always felt immersed in one of their worlds, and their worlds are so entirely different. My mother’s world is comparable to the world I live in today; my father’s was a lot more traditional. The kind of person who thought that anything in the arts would probably be a hobby at best. That set up some conflicts for me that I worked through, but it gave me both an artistic outlook and a sense of business. You can’t do what we do without having both.” 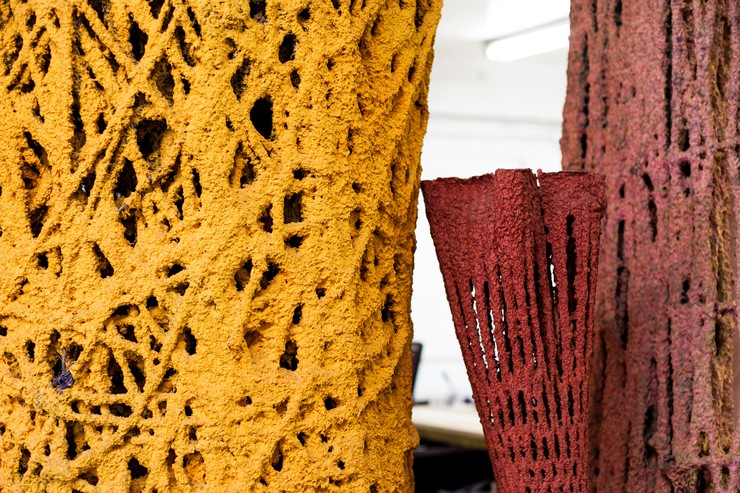 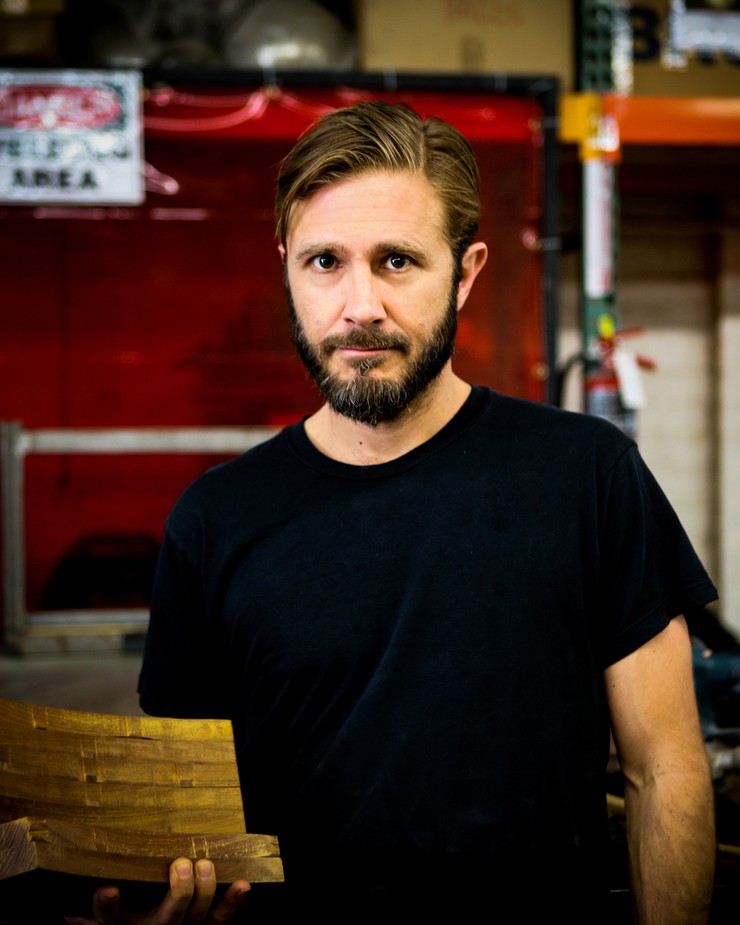 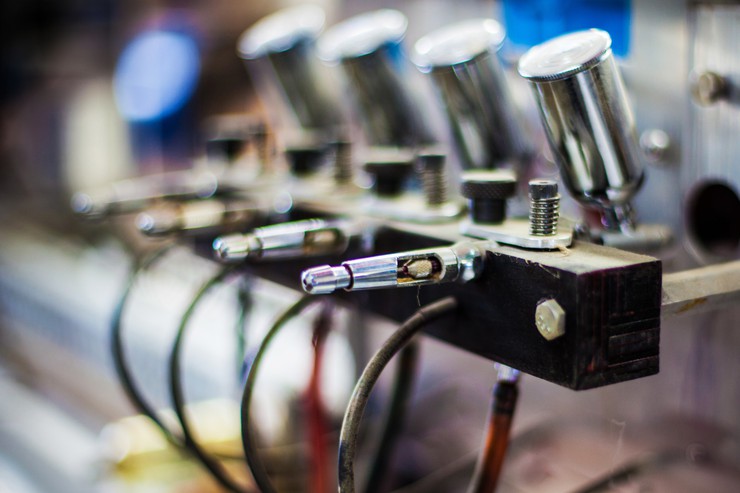 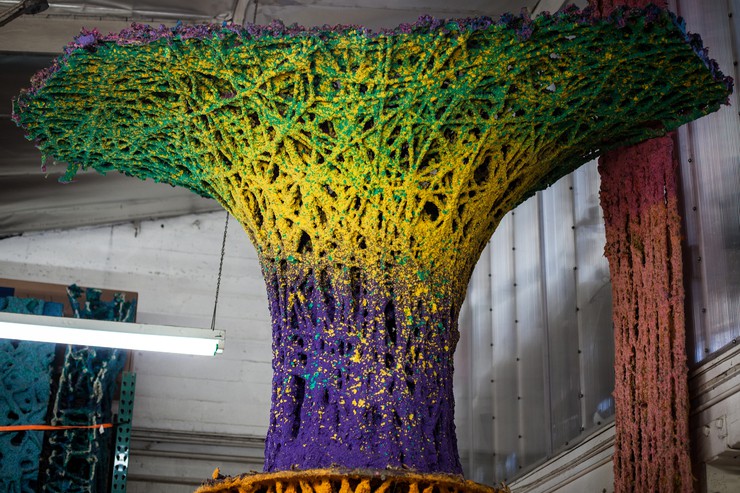 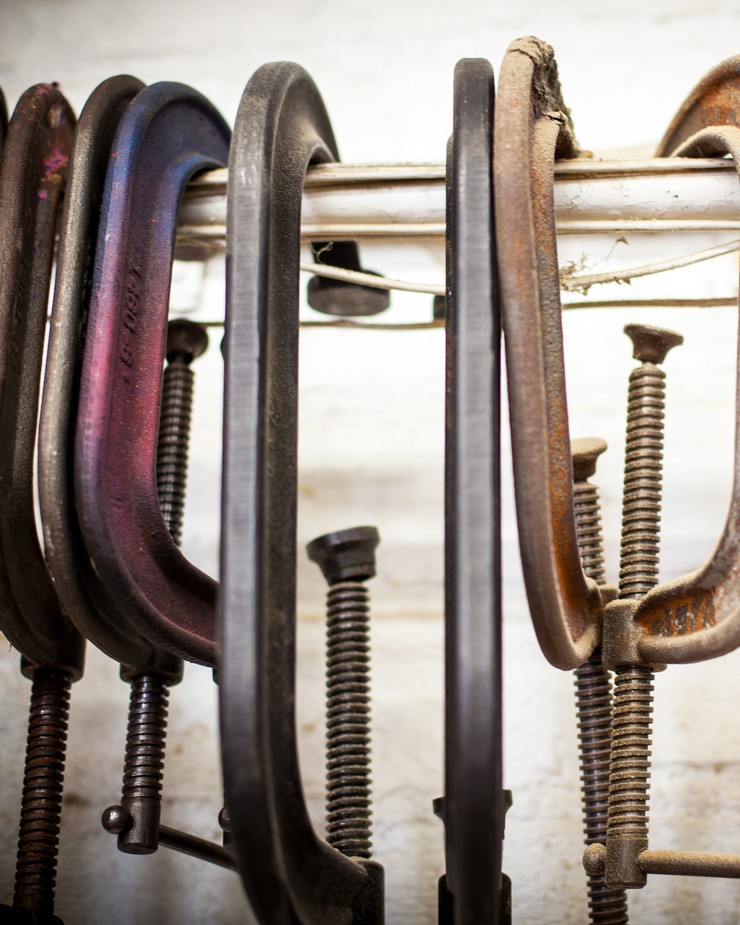 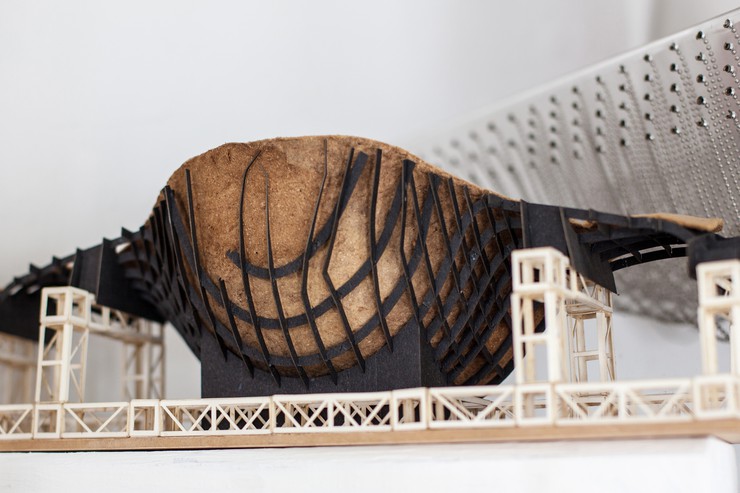 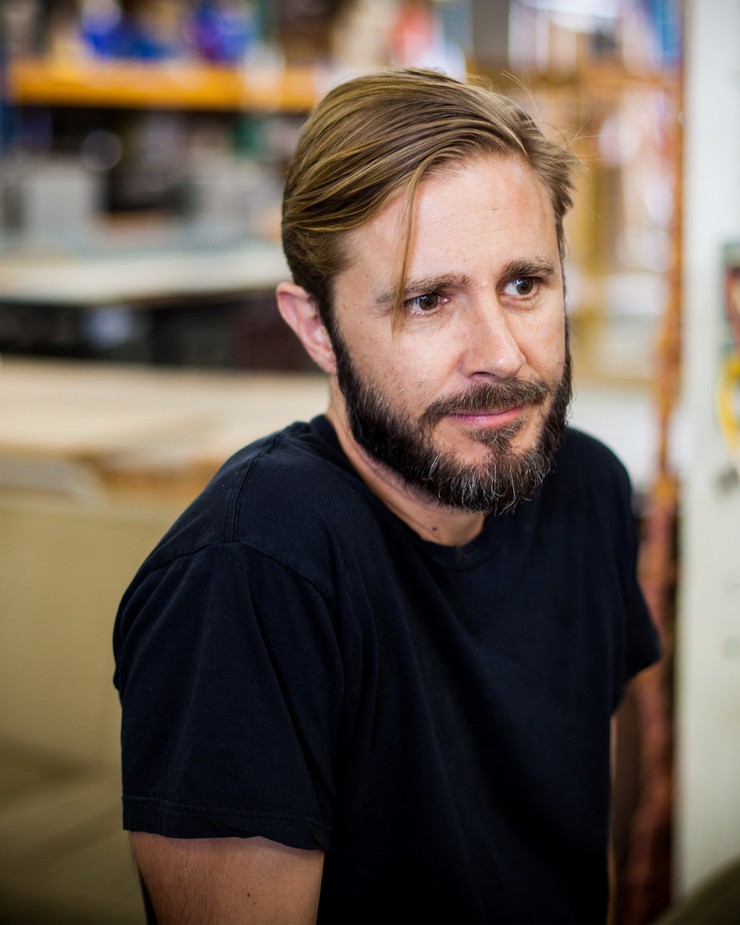 1 Likes
His mother encouraged him to act, and he fell in love with the world of backstage, with its lights, rigs, costumes and sets. An architecture buff, his mother also took him to various Frank Lloyd Wright houses in Chicago, where they lived. Early on, Ben felt the impulse not to make art, but to design things—houses, spaceships and cars, at first. He longed to one day be able to build the things he was imagining. When the time came to go to college, pragmatism took priority over imagination and Ben considered majoring in economics, or politics. Something “useful.”
“There was an identity crisis that was unresolved in me, and it was easier to fall back on the things that were proven paths to success and well being; things that were more business-oriented,” says Ben, who was starting to realize that being both right and left brained truly is a double-edged sword. “I started college with literally no idea who I was,” he says. “I had to become very comfortable with the fact that I didn’t know what the hell I wanted to do.”
A friend recommended he take a class in the college of environmental design—“architecture lite,” as Ben describes it. It was a language he picked up easily, “gain without effort, almost. I felt like I had things that I could say.”
Finally, he’d found a discipline where his left and right brains could coexist and thrive. He decided to move to Los Angeles to pursue a second bachelor’s degree in architecture at SCI-Arc, where he met his future business/creative partner, gifted architect Gaston Nogues. So far, so good—except that with just one semester left and a nearly finished thesis (a design for a movie theater), Ben “lost patience with the architectural process” and stepped away from school. A move wrought with emotion at the time, it was an incredibly important step into the unknown without which, the current vision of Ball-Nogues Studio might be very different.
By this point, Ben had figured out two things about himself: he knew how to build things and he loved movies. Being in LA, and now no longer a student, he explored set design for film. For seven years, he worked as a set and production designer for the Matrix series and for music videos for Michael Jackson, Janet Jackson and Marilyn Manson. 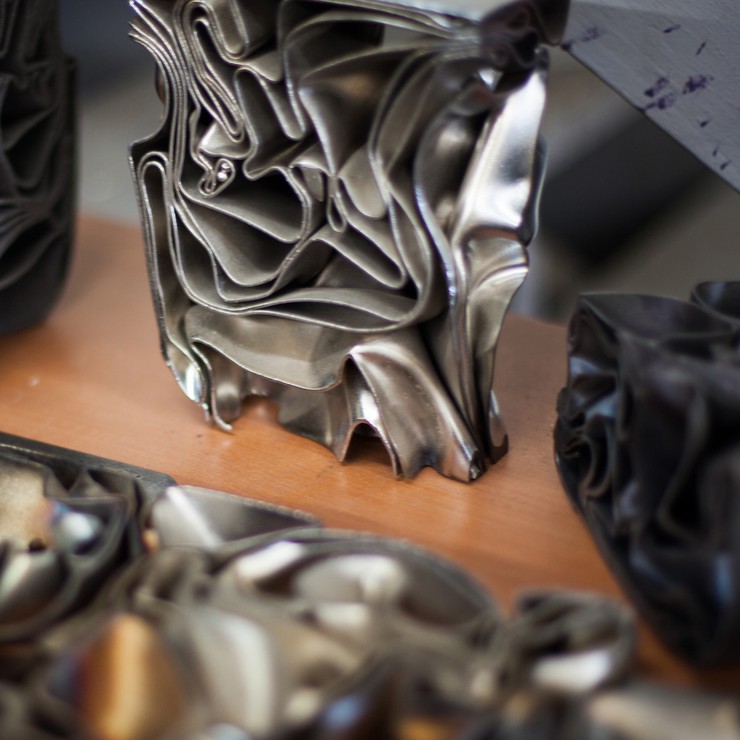 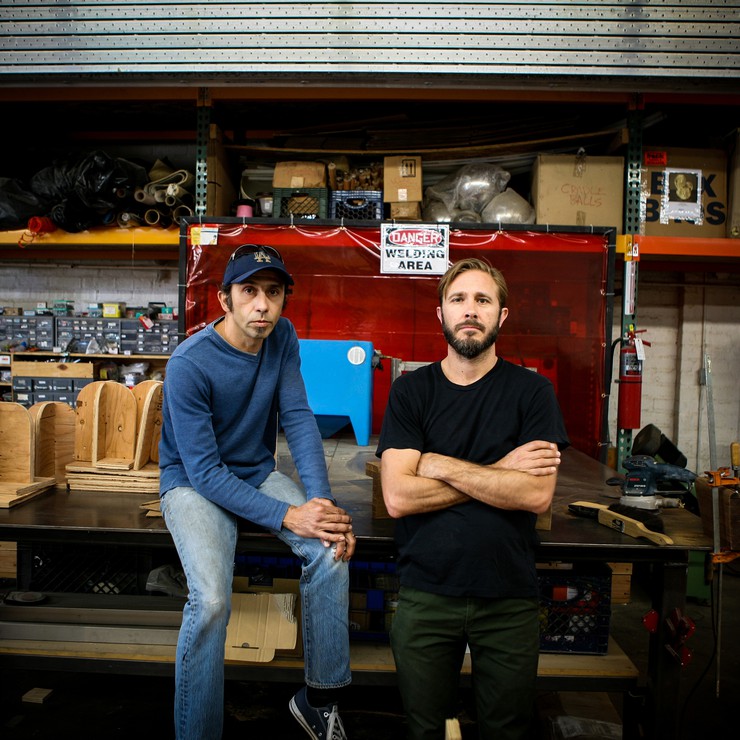 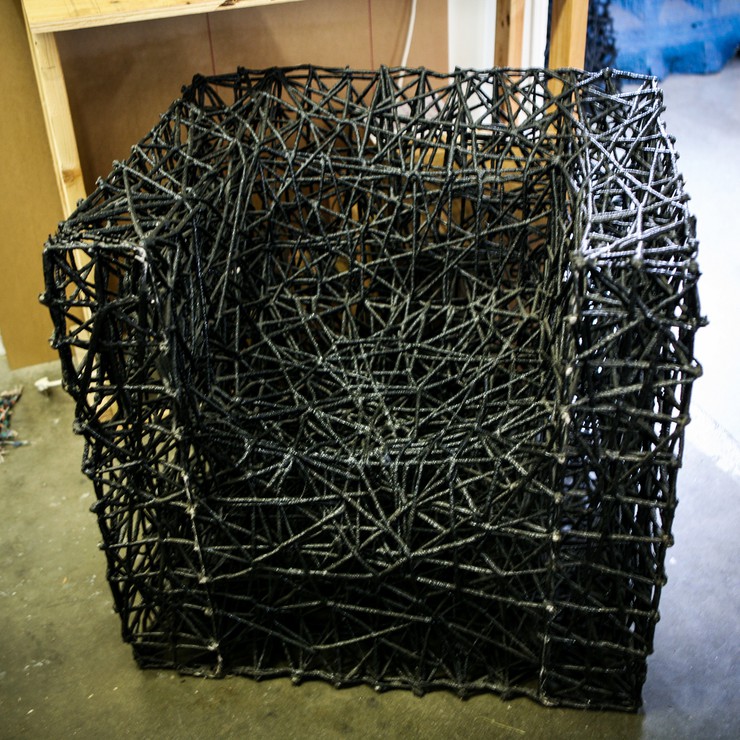 1 Likes
“It connected me to a world that felt familiar, because of my theatre experiences as a child,” says Ben. “I liked being around all of the different creative disciplines in film: designers, cinematographers, writers and actors. And it was fun—you get to do all the things that one imagines an architect does without the responsibility of regulations or structure or clients living in the building.”
But always, there was this cloud of an unfinished degree over his head. One morning, while working for an architect, he woke up and decided he had to finish. But when he returned to SCI-Arc, the field had changed. Everything was digital. The school was promoting new sets of values.
“I was able to fold the digital technology into my real world experience.” In 2005, he and Gaston (who by then had worked at Frank Gehry’s architecture firm for 10 years) decided to collaborate on Maximilian’s Schell, an elegant, golden, mandala-like structure that sunk like a vortex into the roof of the Materials and Applications space in Silver Lake. A finalist for Mies Crown Hall Americas Prize in Emerging Architecture, among other awards, the design brought new aspects of digital technology to fabrication in a way that was inexpensive, yet imaginative. Nothing like it was being done at the time, and their design captivated the imagination of the public.
“That project really was like all my experience and all of my skills coming together at the perfect moment,” says Ben. “If we had done it two years later, it wouldn’t have been successful in the same way.” From there, new ideas for new projects were born.
There are many reasons why the collaboration between Ben and Gaston works—they treat it like a marriage. “That means you have to compromise, acknowledge and anticipate the person’s needs, respect them and respect their time,” says Ben. “But we don't have a lot of conflicts about the content of what we do. We’re lucky in that sense.”
Even now, Ben draws on his film experience almost daily. “I can say pretty confidently that had I not had that experience in film, it would have taken us a lot longer to accomplish what we have accomplished. Film taught me how to install a project, who to call to help with particular fabrication problems or challenges, and, most importantly, to feed your crew well. Always.”

Ben's photo of the spaceship/house he designed at age 9 as referenced in his feature.

"On the shelf in the studio- a couple of past awards, a fabrication experiment for a project and a drawing: Ball-Nogues Studio isn't always a tidy place!"

"Another picture of our shelves- a study model for our first outdoor public art commission, Cradle, in Santa Monica, CA. The silver spheres represent the artwork, the white paper is a model of the assembly jig used to build it."

"A close up view of the "Installator -1"- a purpose-built, computer-controlled machine we use to cut, measure and paint string. We designed and built it to fabricate a series of projects that we call Suspensions over the past seven years."

"A 3-dimensional scan of Ball-Nogues Studio from 2012. We used the scan for an installation at SCI Arc- The Southern California Institute of Architecture."

"Gaston (left) and me in our fabrication space at Ball-Nogues Studio. The design office is an enclosed space on the second level."